how to have someone else's idea 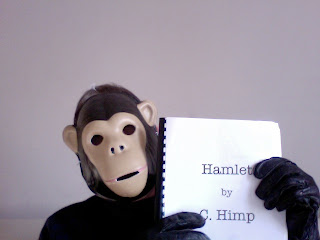 If you tell a Hollywood film producer you've got an original idea they usually ask what it's based on. If you say you made it up, because making things up is what writers do, they laugh, narrow their eyes, and surreptitiously text their assistant, asking them to find out what writers really do. If you persist in pitching your original idea they press the button under the desk that tips you into the tank of starving piranhas, and snigger as they stroke a fluffy white cat with a diamond collar.

But wait. We're being unfair. Put yourself in the producer's shoes for a moment. Nice, aren't they? Italian. Hand made. And as a producer facing a writer across your desk, here's what you're thinking:

1. If your original idea is so great how come nobody thought of it before?

2. I bet someone has thought of it before. There are no original ideas.

3. I wish this idiot would shut up. Is that stupid little beard meant to look cool? What an idiot. Why hasn't my secretary buzzed me to pretend I have an important call, like I asked her to, so I can get rid of this idiot. What's he talking about now? Jesus, character arcs. I should never take meetings with writers. Writers. I forget, what exactly do they do again?

It doesn't matter if you don't agree that there are no original ideas. Someone paying for your script is also paying you to agree with them. You can make a film the way you want with your own money, and then you can argue with the producer by shouting at the mirror. But you'll only scare mainstream money away by claiming to be original. The real trick is to say that you're going to do something that's like something that's been done before and then do something different. You just need to reassure them by using ingredients that look familiar. Choose one from each of the following categories.

PROTAGONIST
Boy wizard, Teenage vampire, Brooding superhero, Robot, Toy, Cop with a drink problem, Crusading journalist with a broken marriage, Eccentric family with a cute kid, Sassy newcomer with an attitude, Feisty woman on a life-affirming journey of self-discovery, Wronged warrior on a rampage of slaughter.

THE GOAL
Save the world, Make the kid happy, Kill the villain, Serve justice, Serve dinner, Expose evil, Get married, Get published, Get rich, Get home, Get laid... mmm... cigarette?

Don't forget to choose a genre. To help you, here's a guide:

SCI-FI:  In a distant galaxy, far away, everything explodes.

ACTION: Your mission, should you accept it, is to explode.

KIDS:  Everything explodes but no one gets killed.


Okay, now just write the script you wanted to write in the first place. They'll never suspect it's original. There's only one danger. The idea you've come up with to make your original idea look familiar may actually be more fun than the original idea. The story with the vampire cop and the beautiful librarian who becomes an assassin to pay for her blind daughter's hospital bills could be pretty entertaining. More entertaining than your original idea about the dying geography teacher who dreams of chess games. That idea seems kind of boring now, though. Maybe it could use a little action. What if the chess pieces were these, like, really cool helicopter gunships, flown by wrongly convicted special forces dudes on death row as part of some kind of gladiator fight-to-the-death type deal? And one of them is this beautiful but deadly female special forces chick and she has a blind daughter? That could work. And it's original, in a way. If there is such a thing as an original idea. Which there isn't, of course.
Posted by Paul Bassett Davies at 11:49 2 comments: