deadline fever - read this by yesterday 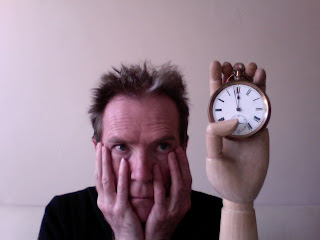 Ask the average writer how they feel about deadlines.  Remember not to use the phrase "average writer" to their face, by the way. But suggest that they jot down some thoughts on the subject. Maybe a thousand words. By tomorrow.
WRITER: "Tomorrow is tricky. It's my mother's funeral, I'm moving house, and my divorce is being finalized.
YOU: "I'll pay you."
WRITER: "What time tomorrow?"
However, not all writers are motivated by money. Of those who aren't, some are even allowed out into the community, under supervision. But the amazing truth is that nearly all writers can be motivated by a deadline even if there's very little money involved. Or even no money at all. This is one of the secrets imparted in an occult midnight ceremony to producers and commissioning editors, after which they cease to cast a shadow. Because while money talks, a deadline yells. A deadline is the most powerful incentive you can use to get a writer off the internet and down to work.
Scientists have confirmed this phenomenon by replicating a writer's normal environment in sterile laboratory conditions (for reasons of hygiene). A deadline is applied. The effects are dramatic and often defy the laws of physics. A recumbent or even comatose writer is galvanized into a frenzy of manic activity, the envy of hardened speed freaks, like the Tasmanian Devil in the cartoons you see regularly if you watch a lot of daytime television. So I'm told. 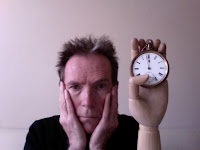 But how can a simple deadline create such amazing results? The classic deadline is composed of two main ingredients: Stress and Time. Stress is a volatile substance. Correctly applied it can stimulate energy, enhance performance and provide extra pep, zest, zing, zip, vigor, vim and other names for potent household detergents. But too much of it can create the opposite effect, paralyzing the writer in the headlights of the oncoming deadline: literary roadkill waiting to happen. To experience complete absence of stress means you're dead; to experience too much just makes you wish you were.
In scientific terms stress is the product of two or more opposing forces. For writers these forces may be, on the one hand, the need to think about getting up and doing some work, and, on the other, the desire to stay in bed and think about who to leave out of the list of people you're going to thank in your acceptance speech for the award for the script you haven't written yet.
Which brings us to the second ingredient: Time. We all understand now that time is flexible. In fact, we don't understand it but we've got that Stephen Hawking book somewhere, so that'll do. And for writers time slows down when you're waiting to hear from people who might commission your work, and speeds up once you find out when they want the first draft.
But what if nobody has been intelligent enough to commission you to write something, and you don't have a deadline? Easy. You're a writer: make it up. It's not so hard if you remind yourself of one simple truth: 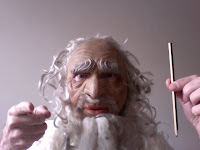 WE ARE ALL ON A DEADLINE FROM GOD. Yes, our mortal span is limited. The script of our life must be delivered to the Great Executive one day - maybe soon. For some, the deadline looms close, while others believe they still have plenty of time, the deluded fools. Shit, this depressing. Why did I start on this elaborate metaphor in the first place? Or is it an analogy? Let's have a drink.
That's better. Okay, let's forget about the clock of life ticking away and focus on what you can do today. Your big advantage as a writer is that you're an imaginative type. So, go ahead, imagine a deadline.
Let's say you're writing a screenplay. First, imagine a producer. The producer you visualize should be a cross between Harvey Weinstein and Jabba the Hutt. Wait, it's quite possible that Harvey Weinstein is Jabba the Hutt. But you get the picture. Next, imagine a meeting where you pitch your idea successfully. Imagine a contract, and sign it. Imagine getting your first draft commencement fee, and go out and spend it. Now imagine you finish the first draft in three weeks. Well done. Imagine getting paid your fee for first draft delivery, and spend it while waiting for the producer's notes before you collect your next fee, for first draft revisions. You may as well spend that as well, while you're waiting. Imagine a call from the producer. They're firing you and hiring another imaginary writer. What? But you've already spent all that money! They can't do that, can they? Of course they can. You should have looked more closely at that imaginary contract you signed. 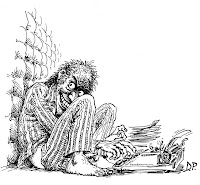 Having established that writers will work tirelessly to meet deadlines for little or no money, the big question remains: why? The answer is simple. It makes us feel needed. We feel special: someone wants us, urgently, for our unique gifts. They must love us. It's pathetic, really. But it works. I myself am writing these very words against a tight deadline, and not only am I not getting paid, I invented the deadline myself. I convinced myself that you've been waiting desperately to read this. Oh, God, is that the time? I'm two minute away from the deadline I set myself. I need to come up with a good ending for this. I know. It was all a dream. No, wait. As you read these words you realize that you've been dead all this time! And that bit at the beginning, about a funeral - that was actually YOUR funeral. Hahaha. And now nobody can see you and you discover you're really Bruce Willis. All right, it's a bit lame, but I'm on a deadline here. Give me a break. Or give me more time. Yes, that's it. I'll finish it tomorrow. I promise.

Some of the above first appeared on www.twelvepoint.com (formerly Scriptwriter magazine)
Posted by Paul Bassett Davies at 06:06 3 comments: