ON THE OFFENSIVE: Writers and the duty to offend.

Last October I chaired a panel at the Screenwriters' Festival in Cheltenham. It was Called 'On the Offensive' and it was about whether comedy should be constrained by considerations of taste, decency and potential offence to other people's beliefs. On the panel with me were comedienne Francesca Martinez, Jane Berthoud (head of comedy at BBC Radio) and Secunder Kermani, a writer who's filmed some very challenging but very funny (I think) sketches and public provocations about religion. The event was very lively and really got people talking and thinking. This is a hot topic and getting hotter.

Email ThisBlogThis!Share to TwitterShare to FacebookShare to Pinterest
Section: Topical 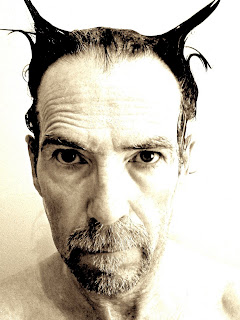 When I was young I was talented but very innocent. One day I met the devil in a laundromat and he offered me a deal. I'd never heard about Faust and I didn't really understand how it was meant to work. Instead of selling my soul to the devil in return for supernatural gifts the devil sold me his soul and he took all my talent. As part of the deal, every time I write something he gives me a little bit back.


Here's a different version:
The day after I got thrown out of theatre school in Bristol I founded a multimedia performance company called Crystal Theatre (of the Saint). I wanted to act and the only way I could get on stage was to write something myself. We did interesting work for ten years and then some of us turned into a punk band called Shoes For Industry. We made an album called Talk Like a Whelk and John Peel used to like us, especially our songs Sheepdog Trial Inna Babylon and Invasion of the French Boyfriends.

Then I created a series of one-man shows, two of which were Perrier Award finalists at the Edinburgh Festival Fringe. I also created pieces that mixed live action with video, like my show Slave Clowns of the Third Reich.

I started doing less performing and more writing. On Radio and TV my credits include: Spitting Image; Smith and Jones; Rory Bremner; Jasper Carrot, and many more, including own radio sitcom with Jeremy Hardy. I also did a lot of corporate work, writing and directing nearly a hundred short films for business and industry, which taught me a lot about writing.

I wrote the screenplay for the feature animation film The Magic Roundabout and also the screenplay for a feature film based on legendary underground comic book heroes The Fabulous Furry Freak Brothers (working closely with Gilbert Shelton) which is in pre-production, and has been for the last four years.
Here are a couple of short films I wrote and directed. How Do You Feel, an award winning short film for Channel 4:
http://www.youtube.com/watch?v=iHFIDkEEPUs&feature=mfu_in_order&list=UL
And a gonzo science film (with scenes of explicit socks) called What Happens:
http://www.youtube.com/watch?v=4gNJMT9mmT0&feature=BF&list=ULFUvxHh8MJZM&index=2
I wrote and produced BBC Radio 4 series ‘Do Go On’ with Griff Rhys Jones and Graeme Garden (Sony Radio Silver Award for Best Comedy) and also several plays for BBC Radio 4 featuring, among others, Bill Nighy, Linda Smith, Martin Clunes, David Hemmings, and Alison Steadman.
I write articles for online magazine www.twelvepoint.com and I also do a bit of teaching as I have a prejudice against starvation. I run some writing workshops with Euroscript, which is a company dedicated to helping writers develop. Check out:
http://www.euroscript.co.uk/

Posted by Paul Bassett Davies at 16:32 No comments:

Email ThisBlogThis!Share to TwitterShare to FacebookShare to Pinterest
Section: About me
Newer Posts Home
Subscribe to: Posts (Atom)