THE HELL GUIDE TO CROWDFUNDING 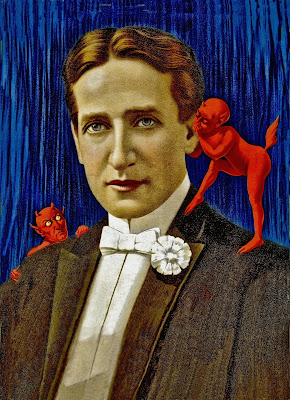 1. Begin crowdfunding by making a list of names, starting with your family and close friends. In your heart, bid them farewell.

2. Now list your colleagues and acquaintances. For each person, come up with three reasons why it doesn't matter if you never speak to them again.

3. Send an individual email to everyone on your list, addressing them by name. Make it personal. Affirm your connection with them, and mention the last time you met. Ask how they're doing. Remind them that you know where they live, and what their deepest fears are.

5. Two weeks later, and you're still on 20%. Begin a relentless social media campaign. Stay online all day, every day.

6. After a week you've hit 30%. That's more like it. After another week you've hit 31%. Shit. Send another email to everyone you've ever met, while continuing your relentless social media campaign. Don't worry, most of those people unfollowing you on Twitter are fake accounts. Probably.

7. Finally reach 50%. NB: If at this point your keyboard is sprinkled with white powder, and it's not drugs, you should probably wash your hair. Also shower, eat, open the curtains,  emerge from your room, comfort your frightened children who don't remember who you are, etc.

8. After another week you're only on 51%. Maybe you should try some positive visualisation. So, imagine your project is fully funded. See it being a huge success. Visualise yourself at an awards ceremony, having given a witty, gracious acceptance speech, as your so-called friends approach you and apologise for not having funded the project, and confess how foolish they now feel. Picture their faces as you deliver an elegant but deadly put-down, whose utter brilliance is slowly grasped by their limited intelligence, while the appreciative laughter of the famous onlookers who now surround you in an adoring crowd adds to their shame and humiliation.

9. Every day is now a gruelling emotional rollercoaster ride from despair to elation and back again, via agonising frustration, exhausted nonchalance, hysteria, savage resentment, boiling rage, and periodic voodoo sacrifices. Enter a weird fugue state of both heightened awareness and total oblivion.

10. Somehow you finally reach your goal. Weep with gratitude for the generosity and nobility of everyone who supported you, and forgive all those who didn't. They are only human, after all. Puny mortals, who knew no better. But you – you are a god. Your achievement is monumental and eternal. Allow yourself a small glass of champagne to celebrate.

11. Wake up from a three-day drinking binge. Apologise to everyone for whatever you did. Let us never speak of this again. But hey, you did it! The project is funded! The process was tough, but it was worth it. What a journey, right? It was awesome. But there's no way you'd ever do it again, of course.

12. Now all that remains is to bask in the adulation of a grateful public (see section 8).

13. Wait for the grateful public to get around to noticing your achievement.

15. Realise the grateful public is completely unaware of your masterpiece. What you need is publicity and promotion. And guess what? You're on your own again. If only you had a budget for a publicity campaign, and were able to pay for advertising, or employ a professional PR person. It's almost like promotion is a whole new project in itself, that requires... funding. Wait, maybe there's a way to raise the funds for this promotional project. Perhaps the answer is to persuade a bunch of people to support it.
A whole crowd.


By the way, my new novel, Dead Writers in Rehab, is now available in all good book stores, and on Amazon. To check out the tasty reviews and buy it CLICK HERE.

Posted by Paul Bassett Davies at 04:18