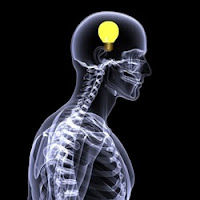 The Observer 11th April 2010
http://www.guardian.co.uk/science/2010/apr/11/brain-scans-probe-books-imagination
People have been striving to analyze literature ever since the first campfire story was deconstructed by the first critic, who hit the storyteller with a club, and was then eaten by the storyteller and his friends, setting the tone for literary debate through the ages.
Literary criticism is a wide battleground. At one extreme is the idea that the author is an omnipotent deity, controlling his story, his characters, his readers and pretty much everything else except his bank balance, which seems to remain beyond an author's control whichever theory you use. At the other extreme is the idea that the author is a kind of talented idiot who has no idea what he's doing and whose work can't possibly be interpreted out of context, which can only be supplied by highly-paid university professors. The ground in between is occupied by marauding squadrons of Marxists, social historians, feminists, deconstructionists and supercilious French semioticians who are almost certainly just having a laugh.
Now experts claim that the biology and chemistry of the brain, and lighting up the right neurones, could be just as important as any interpretation derived from gender studies, social context, or painstaking examination of the author's underwear. Some scientists believe that even our genes could affect our response to literature. But how can we understand all this in simple terms? We can't. It isn't simple. And this is where I come in, the author. I will now attempt to explain it, using that reliable literary device, the analogy.
Imagine the reader's brain as a house. The top floor is occupied by abstract thoughts which drift through a series of spacious interconnecting chambers. On the next floor down logical ideas patrol the endless corridors, forming a conga dance of narrative coherence. Below that - wait. This is a very impressive house. It's the kind of place I'd like to live in. Much better than my own brain, which is more like a garden shed full of repugnant trolls with bad hangovers. And this is the point. Isn't that exactly what every writer is trying to do? We're like housebreakers. Or, more accurately, squatters. We want move in to the reader's brain, ask our friends over, and make it our own. The more effectively we take over the place, the harder it will be for the reader to forget us after we've gone, especially if we leave the literary equivalent of burns on the carpet and red wine stains on the duvets. Or maybe if we were another kind of writer - someone like Anita Brookner or Paulo Coelho - we'd be more like those weird burglars you hear about who break in, clean the place, redecorate, put some flowers on the table and leave a note congratulating you on your taste in curtains.
All this may be one way to think about the latest research in a field that some people are calling 'Neuro-lit-crit' which suggest that different kinds of literature stimulate different neural pathways. Scientists have already discovered that the responses of someone reading Keats will differ from their response to a book by Dan Brown. For one thing, most people who read Keats would probably try to burn the Dan Brown book, which could cause problems in a lab full of expensive MRI equipment. However, the scientists suggest that the next step is that authors will be able to decide what kind of reader they want to appeal to, and will be able to check on how they're doing by running the work-in-progress past readers undergoing brain scans. Which begins to sound more like marketing than either science or literary criticism.

And when it comes to marketing, Hollywood, as usual, has got there first. Researchers there have deduced, again using brain scans, that the most 'appealing' type of film is the action movie, because it's most effective at lighting up the neural pathways associated with pleasure and gratification. But are pleasure and gratification all you want from a film? That depends. Are you a male, between the age of 15 and 26, which happens to be Hollywood's most coveted demographic? If you are, tear yourself away from that computer game/chat room/internet porn, pay attention, and tidy your room. But if you're not, you might enjoy many different types of film, depending on your mood, the quality of the film, and many other factors that grown-ups respond to. And, much as marketing engineers would like to use the latest scientific technology to map, classify and predict our tastes, they're up against the eternal problem that people are different and tastes are subjective.
I have a personal interst in all this. Several years ago I submitted a scheme called 'The Neuronarrative Project' to The Wellcome Trust 'SciArt' bursary, which was designed to encourage collaboration between artists and scientists. My proposal was based on the idea that a writer is striving to communicate his or her own experience as accurately as possible to a reader. The more successful the attempt, the greater the resonance created in the reader's mind. I suggested that this resonance could be mapped using brain scanning techniques, and an eminent neuroscientist, Dr Emil Toescu, of Birmingham university, agreed to join the project. The idea was to simultaneously scan the brains of someone reading 'The Rime of the Ancient Mariner' aloud, and the brain of someone listening. The greater the similarity between the scans, the more effective the artistic communication. The Wellcome Trust turned down the proposal for 'SciArt' funding because it had too much science and not enough art. This surprised me as I'd devised the whole thing as an exercise in speculative fiction in the first place. Now it seems I was simply being prescient. Clever me. If you want to know what made me that way, just come and scan my brain.
Posted by Paul Bassett Davies at 05:19